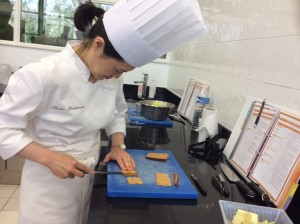 This is Hiromi. One of the great joys of the world is to watch her cut vegetables, particularly little, intricate cuts.. It’s tai chi with a chef’s knife. 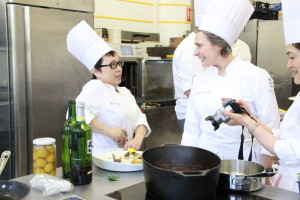 Hiromi on right, me in the middle and Erica, who took some of the photos on the left.

I was standing with my friends Hiromi and Elodie at the coffee bar at L’Institut Paul Bocuse on Wednesday, waiting for my “café alllonge” (espresso with some extra water because I considered it ill-advised to belt back another double espresso).  Hiromi is a professor of cognitive phycology from Tokyo living here for a year.  Elodie has become one of my favorite people.  She’s 21 and a native of Lyon.  Her parents are from the Auvergne, which is the gloriously earthy region just to the west.  Elodie asked, “What do you think of the French people – we don’t know what we are like because  we are normal for us.”  The question sparked a whole train of thought.  What are French people like? 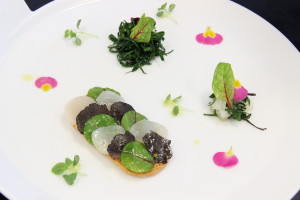 Raw scallop & truffle rounds brushed with vinaigrette on a parmesian sablee, with a little spinach salad in the same lemon vinaigrette. With herbs and primrose petals. This one was all Chef Patrick’s.

I think French people are wonderful.  They’re kind, sometimes slightly cynical,  funny, relational, very polite &  often perfectionistic.  This is one of the most visual cultures I’ve encountered.  I suspect this orientation toward the visual and exactness is exacerbated for the elite cooks with whom I’m coming into contact. 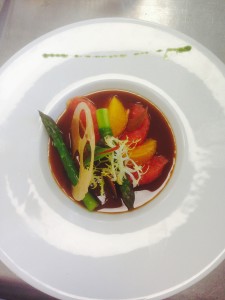 One of the zillion foie gras presentations from last Tuesday. Gosh, does a little of that stuff go a long way with me!

Many, Elodie particularly, are charming and outgoing – demonstrative, fascinated by many things – cooking, design (she’s finishing one program in design and applying to the best industrial design school in France.  She doesn’t care WHAT she’s going to design – chairs, cupboards, bicycles, sleeping cubicles, magical animal-people that look like medieval illuminated manuscripts.  You ought to see her dossier or projects for school.  She has huge eyes and just had 10” of hair cut off, because it was getting “fatiguees” (split ends).  I keep finding myself having the feeling I do with Corgi and German Shepherd puppies.  I want to take her home – I know that Elizabeth and Sarah would get along with her beautifully.  😀 [There’s a photo of Elodie at the top of my last post]

You say “bonjour” to everyone you pass at school, the clerks in the store, the women at the desk of our “apart-hotel” and the bus driver.  You say “bonjour” BEFORE you tell them what you want to buy, or you’re being unutterably rude.  You say “bon journee, madam” when you leave (a “have a great day” equivalent).  Clerks take an enormous amount of time with everyone – it drives you crazy when you are standing in line.  It’s restful and rather self-indulgent when your turn arrives. 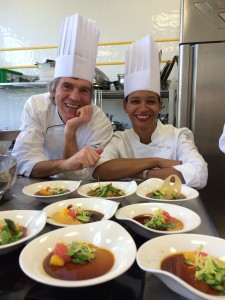 Team Luxemburg-Germany with their foie gras creation. (Raymond and Anna) 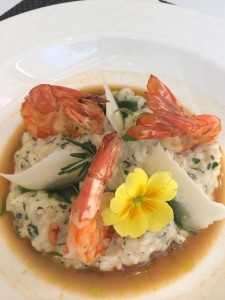 A rather snappy risotto, e4h? Most of them had bright pink flowers. I was the major risotto stirrer. Quite the claim to fame.

I had a 10 minute conversation (no one else in the store, actually) with two women clerks at the pharmacy yesterday.  They wanted to know what I was studying at the Institute, where fascinated by the 10-people-from-9 countries-in-my-class thing.  They asked about the Paul Bocuse Institute (“Is it a really good school?  We don’t know what other people think about it since we’ve always been here.) They were thrilled to know that it was an extraordinarily good school, possibly not as well known outside France as Le Cordon Bleu, but much, much better in the opinion of les connoisseurs.  There are three “MOFs” here – “Meillure ouvriers de France,” which translates into “Best French workers” and it’s a huge deal – This wildly rare distinction given to perhaps 20 chefs every three years – the BEST pastry or cheese experts, or cooking chefs in France.  There’s a movie about it.

Being a MOF is a huge deal.  They wear tri-color collars on their white uniforms for the rest of their lives.  One of the pastry chefs won the 2009 competition as the best pastry chef in the world.  HIS collar has the flags of all the countries he beat.  The competition is being held again this year, in May with the second round in November.  My teacher, Patrick Chabassier, is going to compete.  600 chefs enter the competition and by the end of the first day (a long, intense written exam, and random skills tests), 300 chefs are eliminated.  In November, semi-finalists have 3 weeks to prepare with the announced lists of ingredients and techniques that they’ll be required to incorporate into a meal).  Sounds as if it’s pretty much Nightmare City for the contestants between now and then. 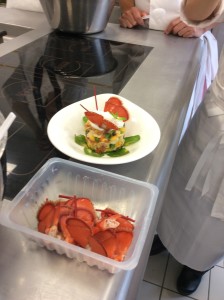 Lobster, made into a butterfly. :–D 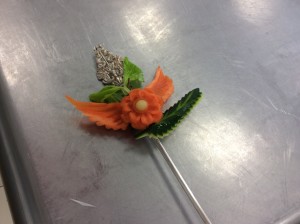 Everybody’s always carving things – diamonds out of potatoes, birds out of zucchini. Pablo, my cooking partner and chef to the princess is great at it and leaves them as presents on my cutting board. THIS one is from the amazing next-door chef, who’s also going to do the MOF competition in May.

One of the MOFs judged a test for the students of the six-week course that’s going on simultaneously with ours.  I had a long talk about it last night in the laundry room with the sweetest guy in the world, here from the Ivory Coast.  At home everyone loves the food he makes, but yesterday’s test with the MOF was “un catastrophe !”  The plate wasn’t hot so the chef rejected it and told him that wasn’t acceptable. There was talk of “…dans la poubelle.”  […into the trash.]  This kind of thing make students So this sweet man is wonder whether they  should try to be chefs.  Maybe the dream isn’t reasonable. I told him one of Russ’ favorite bits of advice for me under similar circumstances (the “shake it off, Martha Grace” speech).  When I went down to change loads 40 minutes later, he got the call that his wife’s train had broken down and wouldn’t be in until midnight.  That was the kind of day it was.  Aargh…. 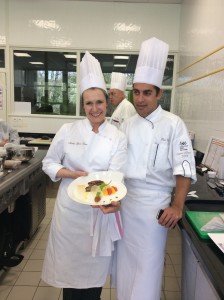 Pablo and me with some foie gras.  I may be the only one who doesn’t like pan-fried, highest quality foie gras.  We cooked 10 pounds of it in about 437 different ways.  (Okay, maybe 12 or 15 ways).  There were also 13 lobsters

The clash of cultures with the French chef’ sense of exactness, or perfectionism is painful for the sensitive and the compulsive.  The Swiss guy in the six-week course also had a “catastrophe” in yesterday’s test.  A week ago Wednesday, I had a Terrible, Horrible, Awful, No-Good-Day, or whatever that Alexander book title was when Elizabeth was little.  It involved a cancelled bus, being 5 minutes late, shoes that didn’t fit and launched orthotics out the back like projectiles, a lost hat and some other stuff.  Chef stopped class.  He slowly left the room to GET me another hat, quietly, with a look, interrupting the entire demonstration on fish.  I re-experienced EXACTLY the feeling of mounting tension, panic and guilt when Mom lost the car keys for 15 minutes, wouldn’t let 6-year-old mini-me walk back to school after lunch. I was late and Miss Green, the pencil-thin, 4’9”, pin-curled, box-pleat-skirted, Woodside principal gave me a lecture on not being careless and late.  I think that French cooking schools are more restful for people who aren’t wired so tightly – for the guys whose first reaction to a thwap upside the head is, “What?  Wha’d I DO?”

But it’s incredibly fun most of the time.  It’s fascinating.  We are learning cooking techniques that are very subtle, taste profiles and ways of developing so many layers of flavor.  One high point was when the chef asked to take some of my blanquette de veau home to his wife because it was exactly right (with the kissing of the finger tips).  And if my hyper-sensitive, perfectionistic little feathers get ruffled occasionally. I don’t really care.  It’s just too fascinating to take personally.

Food, perfect food – in taste, in visual appeal, is an art form.  That’s the message.  It’s not to be taken lightly, but with seriousness and with humor.  Our future lives will be full of critics.  These chefs are here to teach us how to avoid cooking things wrong – to avoid being busted by outsiders.  I think that’s close. 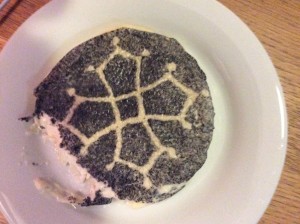 a goat cheese. It started round, but that lower left corner was my dinner one night. It was exquisite.

What are the French like?   Why am I here?  Why did I pick Lyon and this school?   What do I think about the French people?  They keep asking – the doctor asked me, my French friends wonder, the receptionist at the apart-hotel, the lady at the pharmacy.

So here’s what I think.  I think the French people are kind, warm, curiously vulnerable, generous, have the slightly pessimistic outlook – their economy is problematic right now and life is difficult.  Many people are quick to laugh and truly relational.  Greetings of “bon weekend” and “ca va le weekend?” (“have a great weekend” and “how was your weekend?”) seem heartfelt.  They ask and they care.  When they say you are kind, you feel kind.  Their visual perceptions are quick and incisive (people, style, the knotting of a scarf, the perfect triangle of a quenelle, the 7 sided turned vegetable, the arrangement of glasses and spices, the collar of your raincoat).  I’ve heard the saying “you first taste with your eyes,”  about 8 times.

So look at the pictures of the food carefully.  They’re what the French people are like.