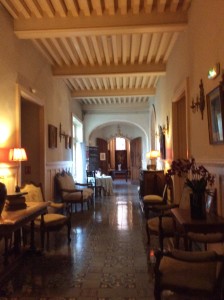 One of the hallways in the Bocuse Institute chateau. It’s very beautiful.

Woosh, what a first week.  I love this place and these people.  I’m sitting in my little apartment, eating leftovers from last night’s cheese tasting with a glass of Chateau Neuf de Pape bought at the little grocery store named “Casino” on the corner, thinking specifically of so many of you who may read this. I hope the little piece of Roquefort that was missing from my grubby little wrapped up package of cheese isn’t in the bottom of my new purse mashed between the lining and some metro tickets.   Shrugging that thought aside, it has been an amazing week and I’m so glad I’m here. 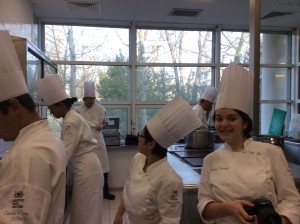 Our class – the smiling little sweetheart looking straight into the camera is Elodie, age 21, our self-appointed guide to Lyon, her city. She’s making it our city, too.

10 of us from 9 countries have hit our kitchen at L”Institut Paul Bocuse at 8:30 a.m. and stir, ciseler, blancher, mincer, gratiner and nettoyer our way toward 5 o’clock.  Two nights we’ve had special lectures/tastings (tea and cheese this week).  I actually counted the steps of the chateau today and it added up to over 1000 in an average day, 1500 on Monday.  Okay, that counts up AND down, but I think that’s fair arithmetic as you run up and down chateau steps, trying to straighten your apron, keep the safety clogs on, and not drop the chef’s hat as it drifts backwards as you simultaneously grab for the railing and smile “bonjour” to the guy in a suit running the staircase in the opposite direction. 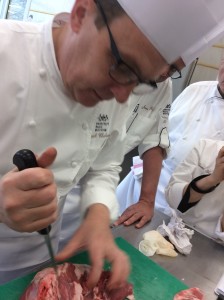 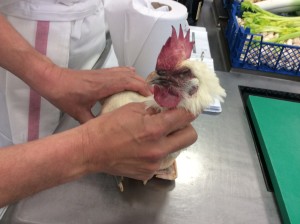 Poulet de Bresse. It really was staggeringly good – truffles under the skin, cooked in a salt/flour/egg white/water coating, then served with a cream, foie gras truffle sauce

Chef Patrick Chabassier’s cooking is mesmerizing.  Everything he does with food is quiet.  He doesn’t announce demonstrations.  He starts doing something.  We dash toward him and ask questions to figure out the technique – what is he SEEING that cued him change the heat?  What’s he smelling to know it’s time to dump the old butter out of the frogs’ legs and add the butter-herbs-garlic-anise liquor-cumin mixture he had me make?    I can’t imagine forgetting the image of this man as he gently juliennes carrots, or reverently rests his hand on the Poulet de Bresse as he explains that this is the best chicken in the world, then smooths its head feathers, pulls at its joints and takes out the neck.  He’s quiet.  He’s funny.  He’s very French, with great kindness and a lovely sense of humor. 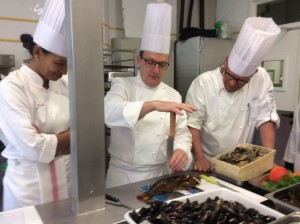 He conveys wordlessly a respect for la cuisine Francaise and for us as we’re trying our level best to soak up every insight tired knees will allow overstretched brains to absorb.  Today he made the lobsters wave to us.  Since it was Friday, we got several renditions of “It’s FRI-day…,” with an ’80’s dance, alternate fingers pointing up.  French cooking is hard and French cooking is fun.

Now, for L’Equipe, The Team  There are 10 of us from 9 countries (The repeat is Holland, then Luxemburs, Hong Kong, Germany, France, Bulgaria, Uruguay, Japan, and me.)  This is one of the nicest and most high powered group of people I’ve met in ages.  Our course for obsessive amateurs is 3 packed weeks long and called “Cuisine et Passion.”  We do have one professional chef in the group. 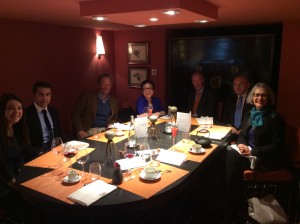 Not all here yet at the welcome lunch, but Pablo is 2nd from left in blue shirt/white collar

Pablo is from Uruguay, where he cooks for a Hapsburg princess.  We asked him what he cooks for her and he said in Spanish, “foie gras and things like that.”  We nodded understandingly and murmured, “ahhh…. Princess food.”  With very different personalities and backgrounds, the group is funny, thoughtful, and kind, with a real feel for food.  I haven’t had long conversations with everyone, but may of the stories I’ve heard so far feel familiar – people who have worked hard at professions they love, cooked intensively most of their lives and realize that they want to do once-in-a-lifetime things now, because it matters.  Time is precious.

There’s a venture capitalist; an oncological surgeon; a Cisco manager who heads a team that’s working with China; a beautiful Japanese woman whose husband has a sabbatical and who decided to take a year off to be with him; a darling 21 year old from Lyon who’s in cooking school, but spending her spring break here cooking; a German marketing expert who looks like a supermodel, hunts and field dresses deer. (She sent me an e-mail last night with a reminder that although life without creme is possible, it’s utterly meaningless.  Anna’s next to the chef in the lobster cutting picture.)  The Dutch chief of oncology is to the right.  You ought to SEE the way that guy turns mushrooms – small motor coronation like Heifitz’s.  Upon mature reflection, that’s probably a VERY good thing. 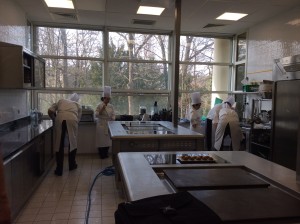 cleaning our kitchen at the end of a day

We’ve worked hard core all week on the French classics – 10 kinds of fish Tuesday, stocks and cutting techniques and vegetables on Monday, Meats (lamb, beef, veal, chicken and rabbit) on Wednesday,  probably 15 sauces during the course of the week (you ought to SEE my sabayons and beurre blanc at this point) and all the crustaceans on Friday.  Details later, but just enjoy this photo of captains of industry, marketer, doctor, writer, researcher swabbing the decks in the kitchen.  Our new hobby, as Paul from Holland said, is washing and IRONING our uniforms.  This is a group of people that I suspect don’t typically do a lot of ironing.

Oh, I just found the lost nugget of Roquefort.  NOT smashed in the purse.  Hurray.  Life’s good in Lyon.