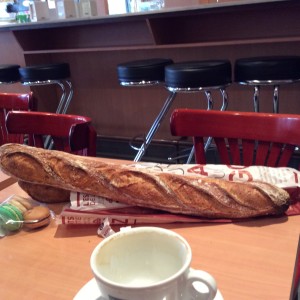 2014 Best Baguette in Paris. Paris’ 4th best macarons are just to the left, under the baguette.

This is it.  It’s the best baguette in Paris, or at least it’s the best baguette in Paris’ sister.  I’m here to tell you that I’m not arguing with the judges.  It was superb – cream-colored insides with beautiful air pockets to trap runny cheese or sauce, and a crust that was both crackling and tore when you pulled it apart.  I drank a cafe au lait at a little tea table in the bakery and stared at it. 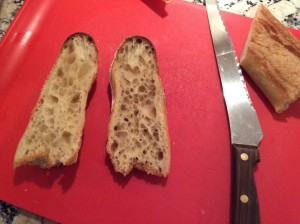 The baguette’s “crumb” – the inside pockets – two mornings later when I used it for toast.

This baguette was made by 24 year old Anthony Teixeira, baker of Aux Delices du Palais, a boulangerie/patisserie at 60 Boulevard de Brune in the 14th arrondissement, Porte de Vanves metro stop.  As you come up from the metro at the Blvd de Brune exit, continue straight in the direction you’re facing.  The bakery is about 10 blocks down, on a corner on the right.  Paris has an annual baguette contest.  They were worried that baguettes were tasting like those in American supermarkets or at Breadsmith.

Sorry to be rude, but the combination of machinery, dry yeast and fast rising methods produces Wonder Bread, no matter how pretty the loaf.  Taste was disappearing, even in France, so about 20 years ago, Paris started a competition, Le Grand Prix de la Baguette Parisienne.  It’s a big deal.

One day a year, hundreds of bakers from all over Paris submit baguettes that have to be made in the traditional way with the traditional ingredients:  flour, starter or yeast, salt and water.   No sugars, no additives, no fixatives, no freezing, not too much salt, the right size – just “la baguette de tradition.”  That, by the way, is what you have to ASK for even in artisenal bakeries in Paris, or you’ll get absolutely beautiful…..  (wait for it….)  Wonder Bread.  Enter the boulangerie (bread store), say, “Bonjour, madam.  J’aimerai une baguette de tradition, s’il vous plait.”  [Get your baguette, pay her the 1 euro and 20 centimes, or 1 euro and 40 centimes in a very fancy neighborhood.]  Merci beaucoup.  Bon journee, madam.”  (See how polite you are?) 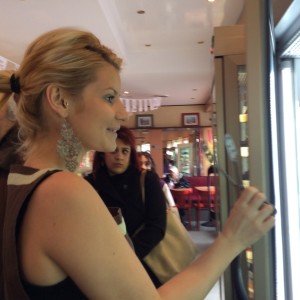 The contest, The Great Parisienne Baguette Prize is a juried, blind tasting of hundreds of submitted baguettes.  The winner receives the honor of supplying bread to the President’s Elysee Palace each morning for a year.

The 2014 Grand Prix award was unique – never before had the same bakery won.  M. Teixeira’s father was the winner in 1998.  M. Teixeira Pere’s win is the reason the bakery is called “Aux Delices du Palais” (“in the manner of the delights of the Palace”). The 1998 honor is emblazoned on the signs in front, on statements inside, and on the edge of the cake and tarte wrappers.  With the 2014 win, I suspect they’ll redo their signage. 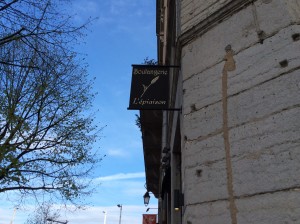 L’Epiaison, the great Lyon bakery – on the south side of the east-west street two blocks in front of the Vieux Lyon metro station, around the corner from the cathedral, and directly west of the Saone bridge over to Presque-Ile. THIS baker is my hero.  Erica and Hiromi, my Paul Bocuse Institute cooking friends say it tastes like the best Japanese bread and they love it, too.

A word of explanation – I am as much of a baguette fanatic as exists in the United States.  In the last couple of years, I’ve made well over 1000 baguettes in hand-made batches of 12.  That’s a whole lot.  I’ve experimented with various combinations of American flours, proportions, rising techniques, rising times, yeast/leaven combinations and baking temperatures.  Our trip to France last January, with a nearly sign-language conversation in my five-month-Rosetta-Stone French with a brilliant Lyon boulanger spawned a fevered search to develop the perfect “levain liquid” (starter that isn’t normal, dry yeast).

I eat baguette every morning for breakfast, I ply the neighbors with it, Sandy, my buddy who delivers for UPS brings me 20 pound boxes of Bob’s Red Mill Organic White flour from Amazon and rumbles back down the forest driveway with baguettes tucked into the passenger seat.  So I began the Paris leg of the Mad Baguette Pilgrimage last week.   I headed to Aux Delices du Palais the first day I wasn’t in cooking classes.

I rode the metro to the south of the 14th arrondissement.  I popped to the surface like a groundhog and spotted guys on the sidewalk selling 8 bananas and a pile of onions off of cardboard boxes at a very reasonable price.  Maybe the food fell off a truck.  A dad on a store stoop simultaneously watched an infant in a parked stroller, supervised his 4 year old on a scooter and smoked a joint.  I, like the the groundhog, felt like diving back underground.

Now here’s the deal.  If I wear my reading contacts, I can read my iPad, my computer, recipes and see the mushroom I’m turning, but subway stop diagrams and lower-shelf museum display explanations are muddy.  If I wear my eagle-eye, long distance contacts, I can see the street signs in Paris.  I was wearing my reading contacts.  My iPad’s GPS was having a bad day.  It showed the little dot that was me jumping lightly from block to block as I took five steps.  I had no idea what direction I was headed.  It wasn’t the neighborhood to be wearing your jewelry (I wasn’t), or flashing around an iPad.  So, iPad in the purse clamped under my left arm, trying to look like a local (I didn’t), I strode boldly in a random direction, hoping to hell I was heading east on the Boulevard de Brune.

I had self-awareness of the Magoo-like quality of my activity over the next 12 minutes. Striking boldly into what was actually west on Boulevard de Brune, I marched under the over-pass, past a mattress with a covered, skeletal figure under a sheet.  His shoes and hat were at the end of the mattress.  I wondered if he had been raptured while the rest of us were attending to non-essentials like looking for baguettes. I skirted quickly past with firm tred, hoping a disembodied hand wouldn’t sneak out from under the sheet and snatch at my ankle the way my sister Sarah did that time in 3rd grade after I was fool enough to tell her I was afraid of someone grabbing me when I jumped into bed each night.  There are some bad situations in life when you’re a victim, like car accidents and fires.  But most of the time when you get into trouble, you’re just a volunteer.  So I didn’t tell a soul what I was thinking. 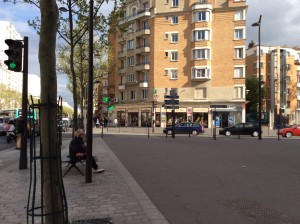 The body under the sheet didn’t move.  I did not tap on its shoulder to make sure it was alive.  I walked two more blocks, sneaked another look at my iPad, no street signs being visible.  I decided to head back toward the metro station and the guys selling bananas and onions, but to try the other side of the street.   I turned left at a restaurant and discovered a seedy looking park with tulips braving blowing trash and the sign “Parque Auguste Renoir.”  It was next to “Tabac Renoir” and “Brasserie Auguste Renoir.”  Drawing quick deductions, I thought, “I’ll bet this has always been a dicey part of town.  Most of the impressionists were poor, at least Van Gogh, but, well, except maybe Monet.  Oh, yuck, look, there are absinthe drinkers at the Brasserie.”  There were no well-heeled redheads with ruddy skin tones.  Also, no baguettes.

So I headed back to the metro station, turned left and headed in the correct direction. 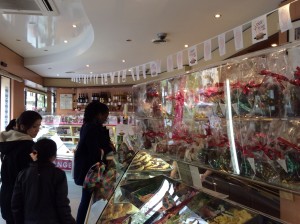 Ten quite respectable blocks later, I found Aux Delices du Palais.  It was delightful.  It was so normal.  Easter candy sat on shelves, Little banner flags waved overhead, and, just like every bakery in Paris, baguettes stood in ranks against the wall behind the cash register.

I waited in line with 3 ladies with headscarves holding children’s hands, 2 traditional looking French ladies and one man who carried shopping bags. When my turn came, the darling blond girl behind the counter (Madam Teixeira as it turned out), smiled and said, “Bonjour, madam.”  I said Bonjour right back at her and told her I had come all the way from the United States to taste their famous and wonderful baguettes.  “You have heard of us?”  “Oui!  You are famous for winning the Grand Prix de les baguettes de tradicion.” 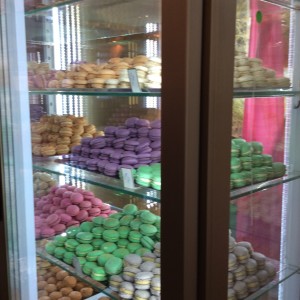 the macaron case. I got one espresso, one vanilla, and one pistachio.

So I got two baguettes and asked what else was very special that I should taste.  She said that they had also won 4th prize in Paris for their macarons (the most famous French cookie – wildly chic and popular, so this is also a giant deal.)  I asked for three of the little ones, which she had me pick out of the enormous case with 10 different flavors.  Then she got my coffee, chilled my macarons in the quick freezer to make them perfect.  The coffee was French coffee – this is not Italy.  But after one bite, I understood what all the fuss is about macarons.  That little, inch-wide, almond cookie with filling first crunched, then melted, then exploded with espresso flavor.

I tasted the baguette.  It was stunning.  I’m already envisioning the next round of experiments at home.  I’m going to put more water in the dough, some subtle salt near the crust, a sprinkling of flour, and bake them browner.  After a last conversation with Mme. Teixeira and many thanks, I left.

I stopped chez le fromager (at the cheese shop) in my neighborhood on my way home, clutching my baguettes.  I fished euros out of my purse to pay for a little more Basque sheep’s cheese, gestured toward the baguette and asked my cheese guy, “Do you know what this is?”  “Oh, madam, would you like me to put the baguettes into the sack with your cheese?”  Ignoring the question:  “THIS,” I said, “is the Grand Prix winner for the baguettes of 2014.”

“Oh-la-la-la-la,” he answered.  “Who won?  Where is the boulangerie?”  I told him and asked if he’d like a taste.  “Oh, oui, bien sur !”  (of course!).  I broke off a hunk and  handed it to him.  He grinned, turned his back on another customer who had just walked into the shop, and popped a bite into his mouth.  “C’est formidable, eh?   I will save the rest to share with my wife.  You are very kind, madam.”

2 thoughts on “The Best Baguette in Paris”