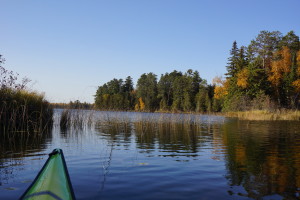 our Minnesota lake and the tip of my kayak

But after talking with friends and thinking a bit, something of the old me, the high school me, started to wake up. I wanted to do something that wasn’t motivated by Duty.  Something that wouldn’t help anyone in particular.  I bought Rosetta Stone and started to learn my first French. I loved it.  I’m like a parrot. In the last two years I’ve read 30 books in French, done immersion weeks at Concordia Language Villages (a wonderful place), and have listened to at least 10 audio books. Given the fact that I’m old enough and bossy enough to do what I want with my fun, there’s no one in the world who can make me read Camus or Sartre again. So I’ve read Agatha Christie, Sherlock Holmes, Dorothy Sayers and all the Harry Potter books in French.  I now know the French words for “following the trail of clues,” all the Quiddich vocabulary, “wand” (baguette magic), and “flesh-eating-slug.”   I’m just not sure I’ll be a source of wit and delight to all the French people I meet.

12 thoughts on “in need of a sabbatical…”